As I said our year was pretty hectic last year and one of those challenges was keeping up with the bees! We purchased two hives but unfortunately due to the nature of beekeeping one hive disappeared.  For some reason, probably an unsettled queen she left and we watched as her workers cleaned the hive of every trace of wax and honey! They don’t waste a drop. We heard somewhere that in their short life they will only make a teaspoon of honey! So what they have worked for they intend to keep even if they move house!

Talk about amazing processes. These beauties will vacate for various reasons and you can never be quite sure why. The hive might be full of mites, overcrowded or it could just be the queen is immature or vying for position with an older or newer queen and decides to move on taking most or all of the hive with her.

They did help us out though during summer with so many flowers and vegetables needing pollinating. It was wonderful listening to them so busy at work pollinating our vegetables.

We were so busy with the new store that we weren’t able to give the necessary time to the hives though that we  should have. Bees are experiencing challenges world wide and our little hive succumbed. But we will continue to persevere. We won’t give up just because we failed this time round.

It reminds me that no matter how well you set things up you can not just set and go on somethings. You have to keep focused, put effort in and persevere. The good news is that somewhere, someone gained a new hive or our beauties went on to greater, and freer heights.

We are hoping our other hive has weathered well the blizzard conditions and hive beetles to see a spring and summer through. Right now it is hard to tell but Spring is coming so we look forward to trying again so that we can reap a harvest if we don’t give up.

Don’t give up today! You will reap a harvest if you persevere whatever your situation!

We are pleased to announce the arrival of our baby bees to the Darg-Kelvin family! After much anticipation and frustration, yesterday we were able to pick up to nucs or nuclear boxes with a queen and some rather unhappy bees who have travelled a long way; been inspected and then travelled to the farm in the back of a pick up.

We had expected them the previous week but thankfully they weren’t ready as the weather was foul! The week they were ready was amazing weather, this week back to foul! So they arrived in perfect conditions.

There was a bit of an issue as one of the boxes wasn’t sealed well and we had some “escabees”! Naomi sat in the back seat watching the escape, giving us a running commentary of how many were finding the  rushing air too much, and ended up blowing off the back of the truck! We had to don our suits as soon as we got home as they formed what is called a beard on the outside of the box and then got a little upset when we shifted them around to their new home. Some settled on Paul’s tool box so we had to take the truck and then the tool box near the garden to try and coax them in to their hive.  At this stage we have opted for the traditional box system but will look into investing in a “Honey Flow” hive from Australia, a system that has taken the bee world by storm!

Carol our mentor came to help us set them up which was much appreciated as there was some nervousness regarding certain aspects of setting up and she was like a midwife, guiding our questions and our concerns!

It was very exciting to watch them start to settle into their new boxes. There were 5 frames sent in the nuc and we set up another 5 frames in each box to begin the process of building wax onto and collecting honey to make brood and build their numbers. We have opted for plastic starter frames and it was recommended we give them an extra coat of wax and we also plugged the edges with wax to stop hive beetles hiding in there (a design problem apparently).

We are feeding them a sugar mixture for a few days just to keep them settled. Our flower garden planted around their new home will be amazing but they have so many honeysuckle vines and a local wild violet that is out and blackberry vine flowers and all the flowering trees on 16 acres, we think we won’t have to sugar feed them for too long!  I am sure we saw quite a few out already searching for flowers after they spent some time circling around their new home orientating. It is amazing that they circle their area getting their bearings on the hive and then take off within such a short time.

We saw one queen in one hive but not the other. So we have to go back in the next few days and have another look otherwise it can be a little problematic and we will have to get another queen asap.

They also had a little “swimming pool” built for them out of an old bird bath. They need water so we just decided to put the bath close by.

It was fascinating to watch as they settled and started immediately to clean up their new home. We watched as a few came out with the dead bodies of their counterparts, either squashed or perhaps overheated during transit.

“Bring out your dead!” Naomi commented, as we watched them toss them off the side of the hive. We left the transport box as the few stragglers found their way into the hive and cleaned off any useful material on the inside of the little box. They were leaving nothing behind and getting rid of anything that wasn’t productive to the hive!

So we start our journey into keeping bees! I am sure we are going to learn a lot more as we keep pressing on!

Be blessed and keep busy

Our bees are coming! Well so they tell us. It is a bit like waiting for an overdue baby! Each time we get excited that they are coming – they tell us our nucs are not ready.

For the uninitiated such as myself, a nuc is not an N – U as in umbrella  and  C as in cat but an N – U as in unicorn and C as in cat or short for a nucleus. It is where a queen has separated and started to form a new colony. They then put it into a box with 5 frames and on delivery you put it in to your waiting brood box.

Then the true wait begins. They orientate and start to gather pollen and nectar to make honey feeding and breeding their babies as fast as they can to inhabit the hive so that they can work to produce their food – honey. Our first aim they tell us this year is just to keep the hive alive. The percentages are extremely high for the death of hives throughout the nation here and across the world.

Without bees we are told there will be some big issues! So we are going to do our best to get these babies through the winter and hopefully enjoy the taste of success as well by being able to rob a little of their efforts for ourselves and our effort.

We purchased a plastic frame we were told is a good way to start and then found a design flaw which allows hive beetles (a pest) to crawl up into the sides and top and bees are unable to get to them. So last week I sat for hours pressing soft wax in to the frame edges to stop the beetles being able to get in to them. We will see if it works.

Paul, Naomi and I also prepared a lovely garden bed for them, sowing an amazing amount of wild flowers so they can feast throughout summer.

I am surprised at the amount of feeding you have to do currently as opposed to years gone by when the hives were virtually set and leave. Now there is quite a lot of “farming” needing to be done including keeping pests etc out and overrunning the hive. Paul is having flashbacks to his childhood when he used to watch his uncle care for over 80 hives. He is amazed at just how much he remembers, which is just as well. However, we are blessed by a lovely neighbour who is also secretary of the bee keepers guild we have joined who has agreed to be our mentor. My phone calls and emails are testament to her patience with us plus she is great at pulling ticks out!

It is all exciting and hard work as we work on the farm putting in loads of vegetables but we are enjoying the harvest of our first spinach and lettuce already! I love that you can taste the difference!

On the home front at the beach house we have been blessed by the two families of doves making their nests on and under the front verandah. What a sweet delight to watch the mummies and daddies do shifts in sitting on the nest and feeding their now hatched young!

They have both chosen prime real estate, one on the head of a stuffed antelope and the other under cross beams under the verandah. Both are out of the elements and away from predators!

Nature has been all over us with ticks and chiggers (don’t ask) but the birds and the bees are a nice bonus! Oh and don’t forget the 5 or so snakes we have found as Paul cleaned the wood pile! Unlike Australia – they were all harmless! We are arranging for an epee pen as part of our beekeeping tools and as well I made up an essential oil mix to keep the ticks at bay!

A recipe I found is as follows:

a base of coconut oil, drops of peppermint, eucalyptus, rosemary, tea tree, lavender essential oils. I also added some water to enable spritzing but found on the first attempt I added too much, which watered it down too much. It does need to be reapplied frequently due to sweating and wearing off. I am happier using that then poisons.

So a lot of fun and hard work in the past few weeks, which meant having to make time while the weather is good to get things in to the ground and growing! But which meant little time at the computer to write!

So a change of pace at the beach, and then back over to the farm to hopefully await the anticipated arrival of our Nucs! Will keep you up to date on our journey into beekeeping. 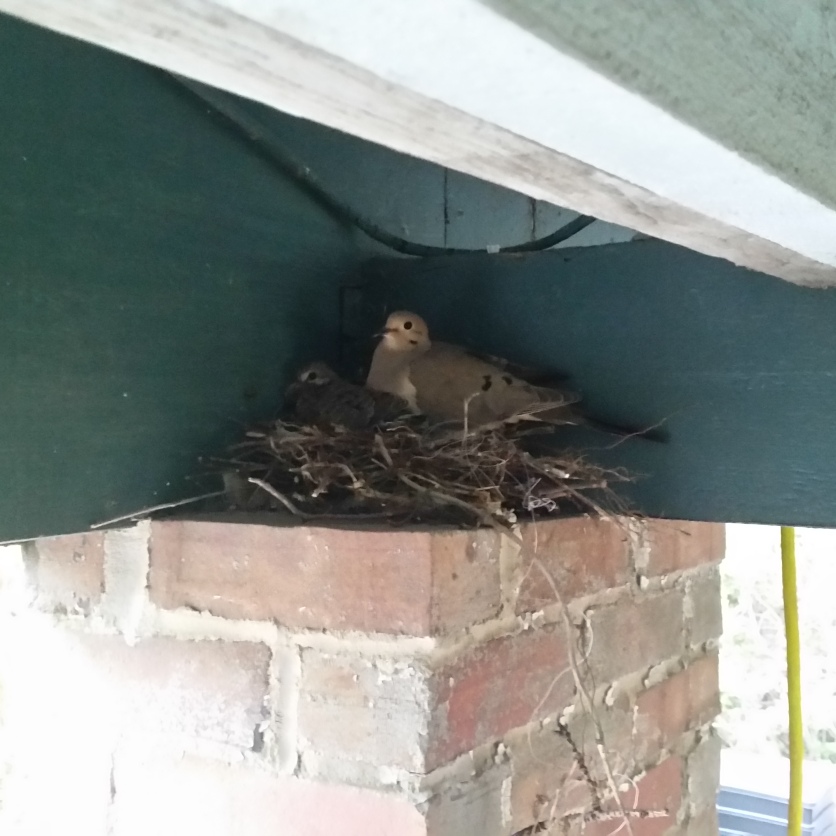 Only seen one here but there are most likely two. They are so sweet perched on top of the head!

Until next time (with photos of our newer babies)