In December 2015 we celebrated our 40th Wedding anniversary and part of our 12 month celebration apart from walking the Camino,  included setting sail in May the following year for a cruise in Alaska.

It was a cruise Paul has always wanted to do and the weather, and cruise liner did not disappoint. It was very different to walking across Spain carrying a pack and almost felt indulgent! It was our first cruise for longer than an over night trip and I really wasn’t sure how I would handle living for 10 days  with thousands of other fellow travellers, eating and doing other “stuff” that I don’t particularly like doing eg drinking or cabarets etc.

But away we sailed! Firstly we spent a few days in Victoria. We would be passing that way later but we really wanted to see the Butchart Gardens without sharing with two thousand other people and for only a few hours. So we walked from the “Waddling Dog” a very quaint British feeling hotel that we fell in love with, including the resident British hound dog – 5th version of the Waddling Dog.

It was a small walk, only about 20 kilometers, but we enjoyed seeing the homes, paths through forests and meeting locals along the way. Walking really lets you see a place from a different perspective. 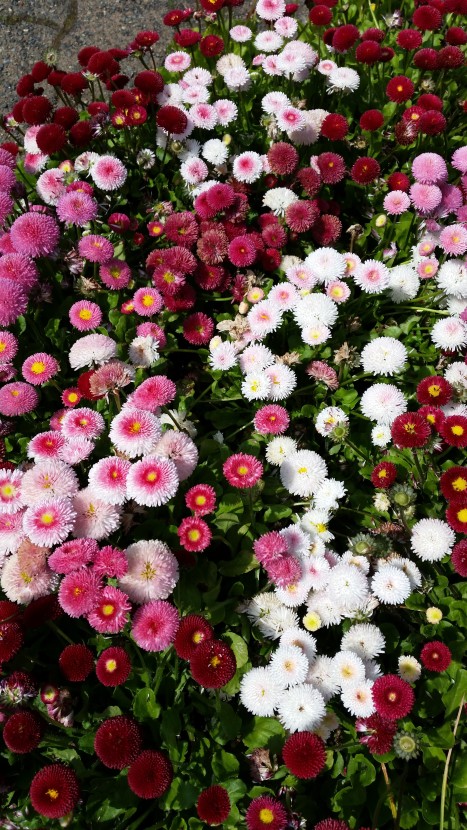 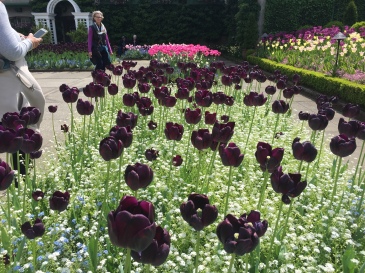 It was a comforting feeling to get the walking sticks back out.

We spent the day walking the amazing paths of flower gardens blooming with tulips and other spring beauties. I absolutely adore gardens and exploring them but the work required to nurture and grown them is colossal. Every sense soaked up the beauty and hard work created by Jennie Butchart and her team.

The next day a great friend of ours from the Camino caught up with us for a little while dropping us off to the ferry to take us to the mainland, with a promise to catch up when we came back with the cruise in a couple of weeks time.

We spent a week exploring British Columbia, staying at our time share in St Ives at Shuswap Lake.  The drive across and the surrounding country were magnificent and just how I always imagined Canada to be.

Returning to Vancouver a week later we then set sail up the Inland Passage.  The weather was amazing each day unveiling breathtaking scenery. Stellar was the word the staff and rangers used often!

One stop was Ketchikan. As we walked around the small town snuggled against the mountains, we discovered Creek Street. Creek Street is a great viewing spot to watch the salmon run although we were a bit early. There was a particular place though that saddened me. It is called Married Man’s Trail. This was the muddy path married men took to visit one of the 20 “houses of ill repute” found on Creek Street in ages gone by. Trust me the street isn’t that long or deep so they must have been falling over themselves!

There is a bridge that crosses over from the main township but the married men followed the trail to the “houses” so they wouldn’t be seen. I watched as many laughed and took photos with “girls” dressed for photo opportunities and all thought it was a good laugh. I didn’t. I thought of the many young girls who would have found themselves possibly trafficked but definitely abused by the men and as well ostracized by the “normal” women of the community.

I found it sad that men felt the need to visit the ladies of the night! The Street was also the place for liquor to be smuggled to in the era of prohibition! So it was definitely a party street.

What I find sad is how men relinquished their vows to visit prostitutes and still do. The Bible says that the marriage bed is not to be defiled. Having to look outside of marriage to be fulfilled is destructive on so many levels. There is of course the physical side of sleeping around which can attract any number of diseases. Then there is the emotional drain of secret keeping as well as becoming emotionally involved with someone else. Finally the spiritual aspect is the most dangerous. Jesus said even to look on a woman with lust was considered adultery! So bottom line looking outside of marriage for sexual satisfaction will lead down the path of destruction!  It will destroy your marriage, possibly your physical life and definitely your spiritual life.

I think of the Butchart Garden and the effort it took to create such a place of beauty out of an old quarry and I stand in awe of that work. Yet similar effort must be given to the marriage relationship to cause it to grow beautiful things. Nurture the relationship, plant good seeds, and keep it fed and watered with love. Also keep the marriage bed fun and faithful!

Don’t find yourself walking down a married man’s lane and heading to a Creek Street – either figuratively or in your imagination.  Marriage is too precious! 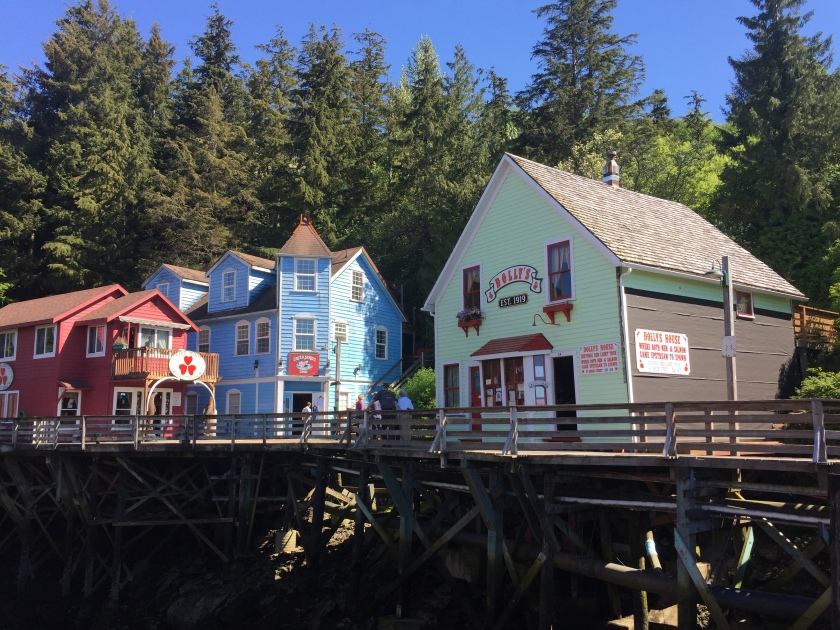 So sad this morning as we approached the silence of the remaining hive. The recent blizzard conditions did the damage! The poor girls succumbed to the severe weather.

The wonderful aroma of honey left untouched, wafted up as we finally had some warmer weather when we were actually at the property. We lifted the lid on the bees to check out what happened over the severe weather.

It is an extremely sad sound not to hear the beautiful hum from an active hive.  As we lifted the boxes we came across the odd dead bee until finally we lifted the final box to the sight of our beautiful ladies unceremoniously piled in a heap at the bottom of the hive. I couldn’t believe how disappointed I felt at the loss.

So our first foray into bees this season has become part of the huge statistic percentage  of failed hives. The varroa mite is the largest contributor to a failed hive and we did have our share of them. Someone suggested “Whiffer” pads to trap them and we did find that worked.

However, I think our loss was the problem of lack of time to really “keep” our bees and pay closer attention to them, as well as the severe storms that we experienced on the Eastern Shore, Virginia and East Coast in general early, in January.

We will need to research the insulating of hives more thoroughly this year and do more homework on how to keep them from fleeing and freezing!

It was sad though and I can only imagine how farmers feel when they lose their herds or flocks as seen during some of Australia’s harshest drought seasons!

Anyway we will borrow a spinner and rob the hive of what honey was left by these before other hives become active and rob the honey.

The other hive was picked clean by the “cleaner team” who worked tirelessly for weeks to ensure nothing was left in the abandoned hive – not even a smidgen of wax or propolis  (the “mortar” they use to seal up the boxes) was left. When you consider the effort and time used to build a hive and produce honey I don’t blame them for not having to repeat the process if they don’t have to. This last hive didn’t have time to clean out.

I did find a site that discusses the aspects of insulating which we did attempt but didn’t follow through on, for various reasons. One of his comments is that the moisture content under the roof can sometimes layer, freeze and then in the melt down from warmer whether, fall down and drown the bees. I am wondering if this could have been a major contributing factor as I looked at the mildew at the bottom of the boxes. A link is provided lower down to the site that details more on insulating.

Here are a few lessons I hope we have learned and will remedy this coming year. They are also a reflection of life –

That’s all until the next bee keeping adventure – Part 2

As I said our year was pretty hectic last year and one of those challenges was keeping up with the bees! We purchased two hives but unfortunately due to the nature of beekeeping one hive disappeared.  For some reason, probably an unsettled queen she left and we watched as her workers cleaned the hive of every trace of wax and honey! They don’t waste a drop. We heard somewhere that in their short life they will only make a teaspoon of honey! So what they have worked for they intend to keep even if they move house!

Talk about amazing processes. These beauties will vacate for various reasons and you can never be quite sure why. The hive might be full of mites, overcrowded or it could just be the queen is immature or vying for position with an older or newer queen and decides to move on taking most or all of the hive with her.

They did help us out though during summer with so many flowers and vegetables needing pollinating. It was wonderful listening to them so busy at work pollinating our vegetables.

We were so busy with the new store that we weren’t able to give the necessary time to the hives though that we  should have. Bees are experiencing challenges world wide and our little hive succumbed. But we will continue to persevere. We won’t give up just because we failed this time round.

It reminds me that no matter how well you set things up you can not just set and go on somethings. You have to keep focused, put effort in and persevere. The good news is that somewhere, someone gained a new hive or our beauties went on to greater, and freer heights.

We are hoping our other hive has weathered well the blizzard conditions and hive beetles to see a spring and summer through. Right now it is hard to tell but Spring is coming so we look forward to trying again so that we can reap a harvest if we don’t give up.

Don’t give up today! You will reap a harvest if you persevere whatever your situation!